I’ve developed a little bit of a reputation, at least among irc.mozilla.org regulars, for being pretty familiar with the bugzilla.mozilla.org bug database. A little too familiar, perhaps.

I thought it would be interesting to do a little bit of analysis on the 1.2GB mbox file that holds all of the bugmail I’ve received since April 2004, and to shed some light on the methods to my madness. Here’s graph that shows the number of messages per day, since April 2004 (each point is one day, the vertical axis is number of bugmail messages receieved on that day): 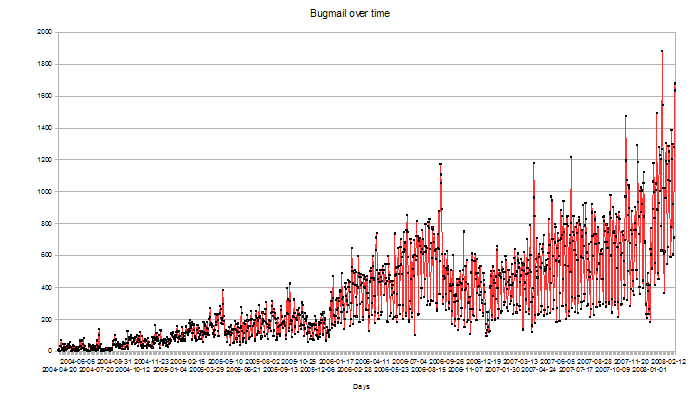 This might be surprising to some people. It was a surprising to me, to be honest, when I received 1882 bugmail messages on January 29th. I’m not sure exactly what happened on that day, but most of the bugmail was probably generated by Gecko 1.9/Firefox 3 blocker and approval triage. I suspect it’s not completely out of proportion compared to some other heavy Bugzilla users, though. I would be interested in seeing bugmail graphs for beltzner or mconnor or bz or dbaron, say.

Beyond the raw numbers, which I will attempt to rationalize later, there are a few things you might have noticed in the graph. The most obvious is that my bugmail volume has been increasing steadily since I first started receiving bugmail in 2004 (as far as I can tell, my first Bugzilla CC was on bug 48037 on April 11, 2004) . You can see drops in volume during the year-end holidays in 2006 and 2007 – the drops are less visible in 2004 and 2005. Weekends are also visible as pairs of dots near the bottom of the range (not as easy to see in this horizontally compressed graph).

I also wanted to see how my bugmail frequency matched up to the Firefox release cycles. Here’s a chart with the messages grouped per month, with major Firefox releases shown on the graph:

You can sort of see a pattern – a buildup of bugmail volume up until the release, with a drop right after the release. Obviously my involvement in Firefox releases has increased as time’s gone by – I had very little direct involvement in Firefox 1.0’s release, but I did quite a bit of work writing and landing patches for Firefox 2, and the bugmail volume reflects that.

10 thoughts on “Confessions of a bugmail addict”